bunny from a crochet square

By eva March 24, 2016
Hello!  We are on Spring Break and our days have gotten a little bit lazy.  Takes me a while in the morning to finish my coffee and get onto chores and crafting.  It's nice to have some time to relax and not rush off anywhere.  But I still have the crafting bug and want to make a ton of stuff.  When I get that kind of feeling, I usually don't know where to start and end up feeling lost.  I usually try to clean my craft area first and start with something small and keep going.

I saw this cute tutorial about making a bunny from just a crochet or knit square.  There are a few tutorials out in blogland and they are all similar to this one HERE.  I don't know how to knit so I looked for a crochet version and found this video HERE.  So I crocheted a square using a smaller than usual hook and the square turned out about 6 inches or so. 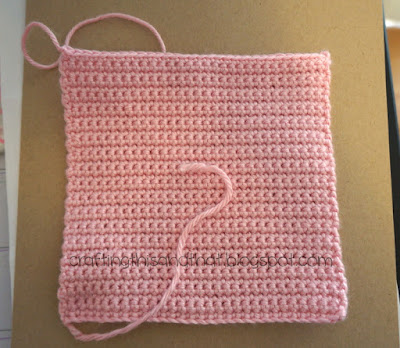 I used this soft pretty pink yarn.  I crocheted tightly (the smaller hook helps) cause I didn't want gaps in between the stitches but that also makes it kind of more rigid and harder to tighten where you need to. 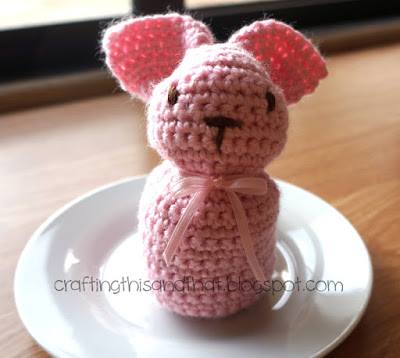 But in the end the bunny turned out cute.  I did end up stitching the ears a bit closer so there wasn't a gap where the filling could fall out.  The other thing I changed a bit was pulling some yarn from up the bottom to the top by the ears to flatten its bottom out so it can sit nicely.  Cause other wise it just rolls around on its stomach. 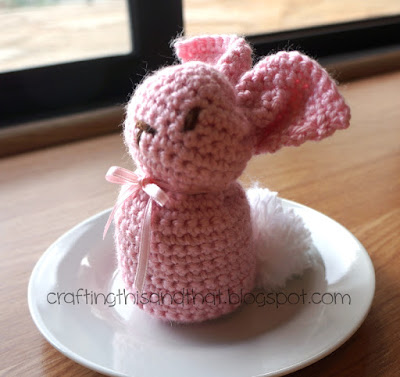 Here is a side view.  I made a white pom pom tail and used embroidery floss for its eyes and nose.  So I don't know but is it kind of scary when you have all the materials to make something?  Hmm, makes me think I have too much craft supplies.  But then there are still so many things I think I want like better crochet hooks.  There are more crochet projects I want try out.

Have A Scrap Happy Day said…
You are sooooooo talented. Never cease to amaze me with ALL the crafty things you make. WOWSER.
March 25, 2016 at 11:13 PM

Cheryl said…
Cute!!! I suggested to my kid to sign up for this knitting project at school so he could come home and teach us how to knit, but he didn't go for that.
April 8, 2016 at 3:32 PM