By eva January 15, 2017
Hello!  So after I sewed up the zippered pouches for my daughter's friends, I finally started on the towels I wanted to sew for our cousins' children.  Truth be told, I had found the towel tutorial super early on in the year and was pretty excited about making these.  I even bought a lot of the terry cloth material but after I got all the materials, I was just so unmotivated!  My sewing machine pretty much sat neglected for months and the my fabric just sat in the box.  I'm not sure, but I was always tired and didn't feel much like crafting.  I guess I was in a total crafting slump.  I think I started on these towels just a couple weeks before Christmas.  I prewashed everything to prevent shrinkage later. 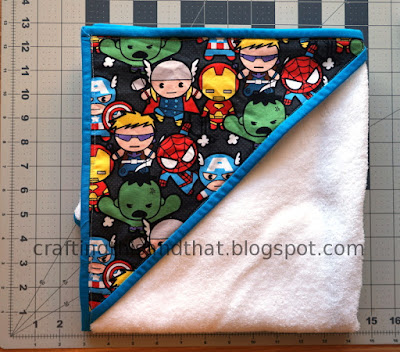 This was the first towel I made using this tutorial HERE.  The only thing I did not follow was the rounded hood part because I think it's just easier to sew the binding on when it's straight.  It's just personal preference.  A rounded hood probably looks a bit nicer and would fit the child's head better.  I made 2 towels like these with the Avengers fabric. 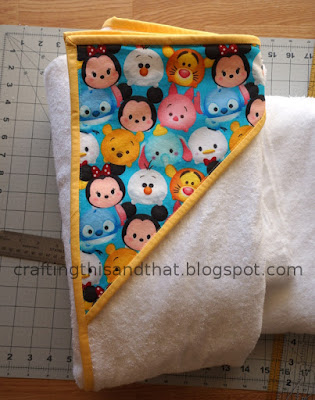 Then I made 2 towels with this Tsum Tsum fabric.  Cutting terry cloth is very messy!  Little white fluffs of fabric everywhere.  I had to vacuum in between towels. 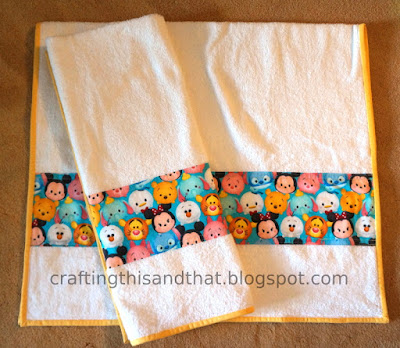 For a couple of the older children, I made just regular towels with a strip of fabric for decoration.  I really like how these turned out.  I might make more of these.  I also machine sewed the binding on.  That was a bit scary because you can't see for sure where you're sewing on the reverse side.  But I think after my 3rd or 4th towel, I was a lot better at feeling where I should be sewing.

Those were all my non paper crafting projects I finished for Christmas.  I'll share more of my paper crafts in the upcoming days.  Thanks so much for reading!