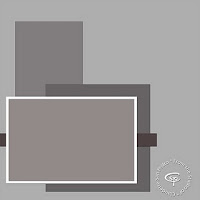 This is the scrapbook challenge sketch over at TGF this week.  I used it to scrapbook my son's "graduation" from preschool.  The school called it an "Aloha Party" but my son couldn't participate cause we were going on our trip the same morning as the party.  I was hoping his teacher could change the date of the party but she didn't so I was a little sad that he'd be missing kind of a milestone event.  Well, he didn't seem to mind too much because we were going to Disneyland after all and his friends still gave him leis and small gifts on his last day. 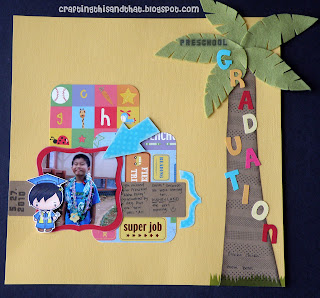 This turned out kind of wild for me.  I was inspired by not just the layout but also this DP that had an apple tree and the alphabet on it.  I would've used it for this layout but the tree was too big so I thought I'd make my own and then I thought of that book Chicka Chicka Boom Boom with the coconut tree (my son really likes the book too).  So that's why I made another coconut tree with die cut letters climbing up the tree.  The big arrow and the bracket are stamps from TGF's Spotlight Kit. 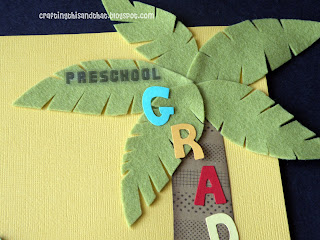 The leaves are PTI felt just handcut.  The black letters (on acetate) and grass are rub ons that I bought from Peachy Cheap.  I made the trunk of the tree by stamping the lines (that remind of washi tape) from TGF's Spotlight Kit repeatedly on the brown paper and then handcut the trunk out. 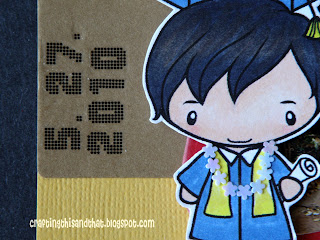 I used TGF's Grad Ian and put a little lei on him.  Cute, huh?  I glued on each confetti flower so good thing I didn't need a lot.  I liked that this was a digital stamp so I could reduce the size a little.  The date is also rub ons.  The kraft cardstock is a die cut from Quickutz that I got from Die Cuts r Us when they were having a really great sale.  The die is supposed to fold into a mini album.  It's so cute!

Thanks for reading.  Hope you're enjoying the summer!