By Cheryl November 27, 2010
Finally, I started on some Christmas cards! Which is unusual in itself because I pretty much send only Christmas photo cards...just have to make one, then print out multiple copies. Again, reminds me that we haven't even taken our family photo for this year yet. But I thought I should make something because I actually won the Hero Arts prize from Kristina Werner's blog! I couldn't believe that, that was totally shocking. I randomly enter things like that here and there, but I don't really expect to win anything. 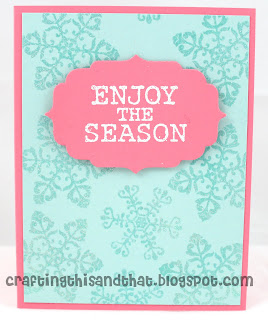 So here's a card using the snowflake set, "Enjoy the Season." It is just PTI cardstock in Aqua Mist and Hibiscus Burst. (I should have used the Hero Arts cards that I also received, but I thought if I messed up, at least I have relatively more sheets of cardstock than wasting the real cards). I was mostly playing around with embossing powders, which got a little messy. I don't know how people keep their powder from sticking to the cardstock. It came with instructions to dust cornstarch over the paper prior to using the powder, but maybe I didn't use enough. I was being a little stingy with the baby powder since I have a cute little mini bottle which I don't think is refillable. Whatever the case, the sentiment is in a distressed type font so most of those extra specks of white are actually supposed to be there, I realized afterward. Not so much for another sentiment I tried to emboss in black, but that's another story for another day. 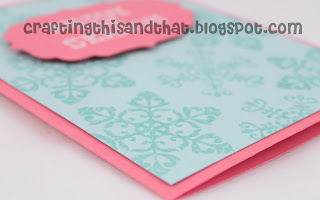 The snowflakes were stamped in Versamark ink, then I used Ranger embossing powder in Holographic. It's hard to get a photo of it, but it's kind of a cool effect. It's glittery and when you angle it in the light a certain way, it does indeed look shiny and holographic! So of course I didn't want to cover up my cool snowflakes too much (not, actually I didn't know what else to put on the card). But I figured a sentiment might be nice, and then remembering Eva's cute pink gingerbread matchbook, I picked pink. The die cut is from a Sizzix Sizzlit set that I got from Michael's on Thanksgiving Day. Yes, Michael's was open for about 4 hours in the evening and I was crazy enough to go shopping with my 30% off (mostly) everything coupon. Plus who am I to pass up an opportunity to go shopping without the kids! When I got to the Sizzix section, there were signs that said 40% off, so I'm thinking wow, plus an extra 30% off. But then when I got home, I realized they only gave me the 30% off. So on Friday, I thought I might as well return it and possibly use my 50% off coupon. But then I thought maybe I should ask if the Sizzix's were supposed to be on sale the day prior. Which the cashier didn't know so the manager or whoever that was actually there on Thursday had to come over and said the signs were mistakenly up...but they actually gave me both discounts! Maybe I should have bought more stuff then! Although I think they gave me the discount because I only bought that one Sizzix. I'm so bad, I'm a crazy shopaholic!
Anyhow, I'm going to try and make another card (while the hubby is home and at least one kid is napping). Bye!

eva said…
i like this card! i like the die cut and the colors and the snowflakes. you're very brave to use all the embossing powders. i try to stay away from stuff like that and glitter that gets every where. there would be too much cleaning involved. i actually didn't buy anything during the black friday sales. i gave my credit card a break.
November 27, 2010 at 2:43 PM