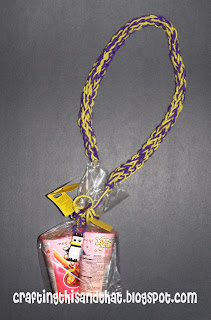 The day before my daughter's lego robotics qualifying tournament, we decided we should make her teammates some leis.  I didn't want to make the usual candy lei so I dug out one of my old magazines that showed a tutorial on how to weave this yarn lei through your fingers.  The magazine is now out of business but I found a tutorial online HERE if you're interested in making these leis.  It's pretty fast and simple.  We made 9 leis and it was easy for my daughter to make some too. 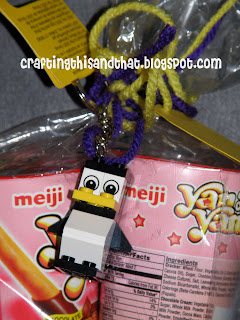 I just tied on a bag of goodies and a lego keychain.  I bought this penguin one for my daughter.  I didn't get a picture of all the leis.

At the end of the tournament on Saturday, the kids were disappointed to learn that although they worked super hard and was thisclose to getting an award, they didn't qualify.  Lots of down faces that day and really the parents took the news hard too.  But through some kind of miracle, the kids learned after school today at a special meeting that they were one of two teams that were added on to compete in the state finals after all!  Wow, lots of happy faces and cheering after that news.  Being on a team, the kids have learned so much and I didn't really realize it until today how they really do support each other.  My daughter's school has two lego teams.  The other team made it to the finals in a qualifier couple of weeks ago.  When they thought that my daughter's team wouldn't go to finals, they didn't want to go either.  Isn't that so touching?  Well, now both teams are going.

Lots of ups and downs on this lego journey.  I hope it ends on an up.

Cheryl said…
Holy cow! You made 9 leis the day before the event?! That's a nice idea though, hmmm, something for me to think about trying maybe some day (again!). Congrats to the Lego teams! The penguin is cute!
November 23, 2010 at 12:52 PM