And another thank you card 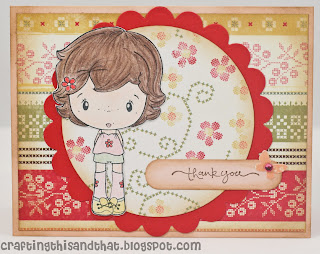 Grrr, it takes me forever to write a post sometimes because I accidentally deleted a photo while I was typing and then when I uploaded it again, it was in the wrong order so I had to do it all over again! And then I couldn't finish typing until my quiet time now. Anyhow, enough of my computer woes. (So weird, I don't usually say "woe" but I had to listen to my son read about a doe, her foe Farmer Joe, his hoe, stubbed his toe, tomatoes - who knew so many words ended in -oe)

Here's another card using a CC Designs stamp (so cute, thanks, Eva!). Her name is either Honey or August, I'm not quite sure. I love her knee high socks. I guess I should mention this thank you card is now supposed to be from my daughter as was the bunny card. I made the boy ones for my son to write in. I think I should start now so by the end of the year I will have Christmas, birthday and thank you cards all ready.

The patterned paper is from a Cosmo Cricket pack, I think it's an old design, but new to me, I just got it not too long ago at Hobby Lobby. But it matches the PTI cardstock pretty well.

Again, I inked the edges of the patterned paper. I placed Honey/August off to the side so the label and sentiment could fit. Unfortunately I should have stuck the label down first, because now Honey/August looks a little too far to the left. The "thank you" is from Stampin Up. 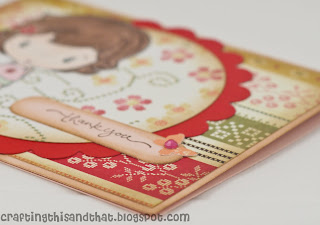 The butterfly die cut came in the paper pack. Then I just added the gem. It was kind of an afterthought. I'm not so much of an embellisher. I should try to take notes more often when I come across a cute card, I can never remember what other people do when I'm trying to actually make my own card.
Anyhow, I think that will be it for me this week, hopefully I will have time to make something again this weekend. Bye!

Carol's Ink Spot said…
Cute thank you card! Pretty patter paper and what a cutie that little girl image is!
January 13, 2011 at 6:14 PM