By eva November 21, 2011
Hi!  Week 18 of TGF's Heart Journaling is to create a page based on your parents, life as a parent or tribute to all parents.  I chose to journal about the difficulty we're having with our youngest child since not a day goes by that he does not tantrum at least once.  And we're talking about full on crying/screaming/writhing on the floor/kicking defiance.  I never would have thought I'd describe one of my kids as defiant especially since the older 2 are pretty well behaved.  So most people I've talked to including his pediatrician just think this is a phase.  And I hope that it ends soon.  But in the back of my head, I worry that it isn't a phase.  What if he acts this way forever?  I mean, I've worked with children with special needs and in special education and I know there is Oppositional Defiant Disorder.  Maybe I am jumping the gun but I can't help to think that this is part of his personality.  He has always been the most needy of my 3, the most clingy, stubborn and I thought maybe it's because he is the youngest BUT what if it's not because of that?  What if he will stay this way?  So far in school, he has been following rules and adjusting nicely but what has changed is his dislike for actually going to school (whining I don't like school in the car until I drop him off) and his poor sleeping at night.  He has gone from sharing a bedroom with his older brother to sleeping on a futon in our bedroom because he would get up constantly at night (at least 3 times) and wander to our room.  It would be a back and forth game and I guess I gave up because I want to sleep. 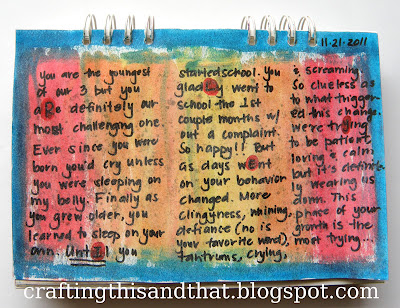 Here is my page.  But through it all I've learned to calm myself down and to really be patient.  I admit early on I'd have a few yelling sessions with him but realized that doesn't solve anything.  He and I are 2 of the most stubborn people I know.

Cheryl said…
Well, my 6 year old will still wander to my room occasionally...he's finally been a lot better over the past maybe year. I actually forget when he started staying in his own room consistently, it was such a gradual thing, I lost track. But he was always a bad sleeper since birth probably too, something about being scared alone in the dark and being a light sleeper. So I don't think that part is too unusual. My younger one complains about wanting to go home after we drop off the older one, instead of going to her school too so that doesn't seem too different either. You should tell him you're going to work so nobody will be home! I tell my younger one that sometimes even on the days I don't work, well, more like mommy goes to work, (not necessarily today). I think your older 2 are like extra mellow so the youngest seems extreme by comparison. But stubborn sounds like my younger one too! I think it might still be that age.
November 21, 2011 at 3:58 PM

Lorraine said…
Oppositional Defiant Disorder? Really? I think there is too much psycho-analyzing with the young ones these days. My son has been stubborn and defiant from day one, lol. Everyone is wired differently. He sounds like a normal little one developing - who maybe wants some attention and individuality?
November 22, 2011 at 4:52 PM

RiNNE said…
I can't imagine what you are going through-- you must be both frustrated and hurting for him. I'm no expert at parenting, but it does sound like it may be just a phase? Afterall, he seems to be ok in school. I also work in the healthcare field and I think that sometimes, we know too much. I work with kids as well and just constantly worry that if my kids show the slightest symptom that they have this and that. I think it's hard not knowing why certain things happen so we're constantly looking for an explanation. From what i've seen here, you're a wonderful mom! Hang in there! Be firm but patient.