On Your 81st Birthday

By Cheryl September 17, 2011
Hello.  I'm actually making a seasonal card, before the season is over, or technically even before it begins since it still feels like summer weather around here. 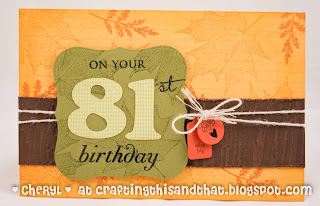 Anyhow, I was wanting to make a fall birthday card, and found this Hero Arts leaves stamp set that I won last winter from a blog giveaway.  So I searched online to get some ideas of what people have done with this set, and I found this card by Nichol Magouirk.  I thought she did some neat things with the background stamping, so here is my version, the simplified version.  This was quite a bit of stamping for me though.

First off, this is a larger card than usual, I just folded the letter size cardstock (Summer Sunrise from PTI) in half.  I used Wild Honey and Rusty Hinge distress ink for the leaves, and Scattered Straw for the text.  The text is rather faint, which turned out to be a good thing since I stamped one half upside down!  It's one of those really slanty old style handwriting fonts from a Studio 490 background stamp.  I actually wasn't really paying attention until after I stamped it as I was more concerned with positioning the card over the stamp since I didn't have a huge acrylic block for it.

The brown piece was embossed with a woodgrain folder, then I added walnut stain distress ink to the raised areas trying to make them stand out more, but it didn't really make an obvious difference.  I cut the numbers on my Craft Robo, using a thick chunky font, Nobility Casual. I thought my little machine wouldn't be able to handle Papertrey ink cardstock, but I just cut it twice (there is actually a double cut function which I didn't notice at first) and it turned out OK.  Then I stamped the numbers with a background stamp from Studio 490, again, like I've seen Nichol Magouirk do with her die cuts.

The Big Birthday Wishes words were embossed with black embossing powder.  That was a bit of a mistake as the ink was a little too dry, so the powder didn't stick too well to the actual stamped images but decided to stick everywhere else on the cardstock.  Then finally I added the 2 little Tiny Tags in Terracotta Tile.  It feels a bit empty on the right, but oh well, that's what happens when I don't use a sketch.  Maybe I will slide the string and tags over to the right a little more. 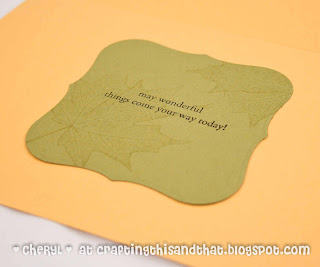 Then I put another Spellbinders label on the inside with the birthday sentiment.  I was actually going to use this size label initially for the cover, but since the card was so huge, I changed it to the largest label instead.

eva said…
wow, that's a big card. maybe everyone could sign it though. i think it looks pretty well balanced with the bow and tiny tags on the right. ever check out the hero arts challenges?
September 17, 2011 at 9:23 PM

Cheryl said…
I will have to check out the hero blog, I had unsubscribed a while ago because I couldn't keep up with all the posts. I don't really have too many of their stamps, just the holiday ones I won. And the Asian girl ones.
September 18, 2011 at 6:59 AM