By Cheryl January 23, 2011
Hello, again! I am actually trying to get some birthday cards done on time. But I mostly wanted to try this faux charcoal coloring with prismacolors as shown by Club Anya Jen. 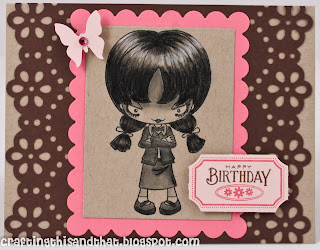 At least there were no color choices involved and I only used 2 pencils. Except instead of using a white pencil, I used French Gray 10% by accident. Which I didn't realize until I was putting it away. But that's what happens as I was looking for my white pencil and I heard hollering/crying from the kids so I had to rush back upstairs. Also note to self, black pencil blends very dark if you put too much color down. The face and clothes turned out a lot darker than I expected so I had to go back and color the hair again. 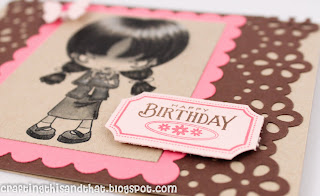 Anyhow, I also got my new PTI stamps that I wanted to try out. Although I guess Just the Ticket is actually an older set. I held off on buying the ticket die thinking I could just cut the tickets out myself by following the border since I had these rounded edge scissors, but I might reconsider. I don't know which is harder, stamping the frame in the center of the die cut or cutting straight around something that's already stamped. Looks like I need to change the blade on my portable trimmer, I didn't notice the fuzzy edges until now.

I also used my Martha Stewart flower border and butterfly punches. I don't know if they match Wednesday so much, but I figure it's appropriate for a spring birthday. 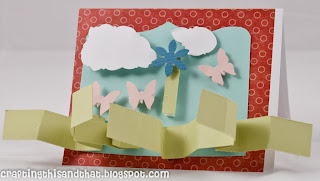 So here's a card my son was working on while I was putting together the above card. It is supposed to have "3-D grass." He even wanted to take the picture himself and then requested that I also post his photo. Geez. Maybe one of these days he will want to go to some scrapbooking classes with me :-).

Lorraine said…
Nice black & white coloring of that image! I have some creepers that I've been meaning to color for a while, but somehow need to figure out the right occassion, lol. Oh and YES, good for your son! Let him create freely and be PROUD OF IT! I really do love his grass - such boldness, lol.
January 23, 2011 at 5:32 PM

Amy said…
Love your coloring of Wednesday and your color combo, the pink really brightens the card! Your son's card is awesome, love the sunshiney, happy feel of it and that 3-D grass is amazing, he is so creative!
January 23, 2011 at 5:51 PM