By Cheryl November 26, 2011
Hello, hope everyone had a nice Thanksgiving.  We tried Eva's method of turkey in a bag, and it actually turned out pretty good.  Although I think the turkey breast could use some butter or something...hopefully one day if my daughter outgrows her milk allergy I can try that.  But finally I had some time to craft while Grandma kept the kids occupied. 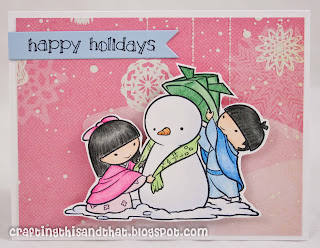 Anyhow, here is my first holiday card finally, and the month of November is practically gone.  This Sister Stamp is so cute!  Thanks Eva for getting it for me (she's my Hawaii connection!)  It took me forever to color since it was difficult to get uninterrupted craft time.  Plus I was trying to figure out how to color with Copics.  I actually took the plunge and bought 5 Copics, only in the skin tones and cheek color, although I don't think I colored cheeks in this one.  I went to Michaels practically every day with a coupon to buy one Copic at a time.  I think I'm pretty much going to stop there with the Copics, because I think they're hard to use!  I had to color the faces twice, because I couldn't blend the colors nicely so I think I just used the one color in the end.  The rest of it was colored with pencils.

Pretty simple after that, just cut the image out and mounted it on patterned paper.  I thought the patterned paper was kind of busy so I didn't really add anything else except the banner with the sentiment, although it still looks kind of empty up there in that corner.  Oh well, I had to move on, so many Xmas stamps, so little time!

And here's one of my proud mommy photos.  Excuse the strange disguise, had too much fun in Photoshop Elements. 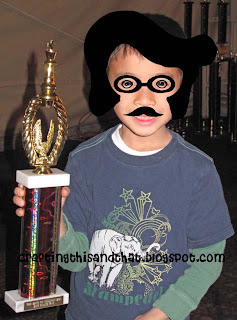 But my son and I have spent so many weekends going to chess tournaments for the last year or so.  Not that he's Bobby Fischer or anything, but since he started with his school's chess club in kindergarten, he has done reasonably well at our local scholastic chess tournaments.  So surprising since I don't like playing chess and am not very good at it, I feel kind of bad that I can't really play against him at home since he always beats me!  Anyhow, this is him after spending all last weekend at one of the bigger chess tournaments.  He was so happy to win a trophy (21st place).  Lucky for him they gave out 30 trophies, usually it's 20, but this tournament had about twice as many kids as usual in his section.  Anyhow, I was happy for him too since he had to play in the section with 1st through 3rd graders and after the first day, he was bawling his eyes out after losing the last game.  He was even 60-something going into the 2nd day, I didn't know if he even had a chance at a trophy.  I think as a parent, I was getting an ulcer for him.  I used to laugh about those parents who had kids in sports and took things so seriously, but I now I know why!  Even as a chess parent, I'm like checking the rankings after each game and trying to estimate where he and the school would end up for trophies.  It doesn't help when most of the other parents are like that too!  Anyhow, excuse my long rambling, I could go on forever about my kids!  I will actually have more to post later too, I think I got quite of bit of cards done yesterday (well, actually 2 and a half which I thought was great for me).

Creations by Shirl said…
Hi Cheryl~
Love the christmas card and you son looks pretty cool congrats on his trophy.....
November 26, 2011 at 7:31 AM

eva said…
hi cheryl, cute card! i like that pretty background paper! you should keep trying with the copics, just practice!
November 26, 2011 at 7:54 AM

RiNNE said…
Copics are hard in the beginning..just keep practicing. Your card is very pretty! Congrats to your son!!
November 26, 2011 at 6:12 PM

Lorraine said…
Your card is so pretty, Cheryl! I love the non-traditional Christmas colors and your coloring of that sweet image. Congratulations to your son! Way to go! Oh and your Copic coloring looks great, but I think you need to work on your Photoshop disguises, lol.
November 27, 2011 at 6:28 PM