By eva February 10, 2012
Hi!  I've been really tempted these last few days to buy some new stamps especially some Saturated Canary or the cute Wryns from Tiddly Inks.  Usually I'm not too into digis, but these are so cute!  But I've been really good!  Been trying to use the stamps I've neglected or haven't even inked up yet.  But I hear new digis will be added to Saturated Canary's shop on Monday so we'll see how much longer this stamp diet will last.  I don't even know how long I should do this.  Maybe 'til I use at least every stamp I haven't used at least once?

I was in search of a sketch for my next card and so checked out the latest one at the deconstructed sketch (#38). 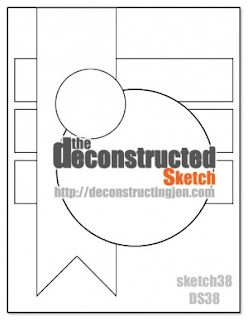 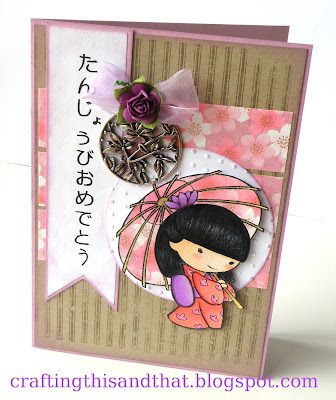 I finally used Ayako from Sister Stamps that I bought a while ago.  She's cute!  And I used my Hero Arts large canvas stripes stamp too on the kraft cardstock which I haven't used in a long while either. 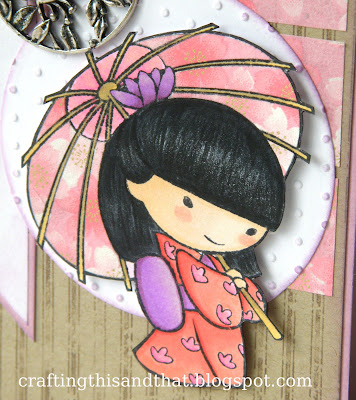 Ayako's hair is combination of Copics and my black Prismacolor pencil.  I paper pieced the panels of her umbrella using washi paper.  Thought it gave the umbrella a nice look. 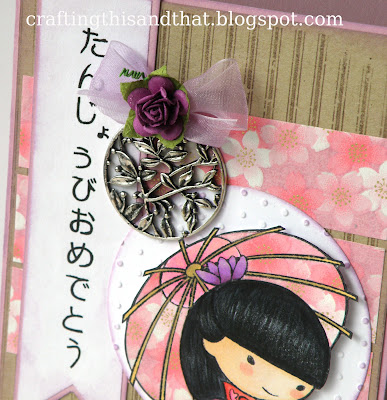 I added that round charm that I think I got as a freebie from SCACD when I last ordered from them.  I thought it looked kind of Asian-y.  I downloaded a free Hiragana font and printed out the sentiment which translates to Happy Birthday.  I had to Google the sentiment since my Japanese is soooo rusty but I still remember some characters.  I guess 6 years of high school/college Japanese helped a bit.  I actually left out the last character so I hand wrote it in.  It looks a bit different from the same character higher up.  Don't you just hate it when you're done and realize you've made a mistake??  Ugh.  Drives me crazy but everything was all glued/taped down when I noticed the error.  The funny thing is that only my older son noticed which character was out of place so I guess it looks OK.

Thanks for reading and have a great weekend!

Cheryl said…
Good luck on your stamp diet...if you can resist! :) Super cute card! The washi paper and umbrella look nice! I like how you colored her kimono. That's good that you remember your Japanese, I had to think a while to figure out the title of your post! Oh, I wouldn't have noticed your last "u," that looks really good. I think my Japanese handwriting probably looks worse than a preschooler's...
February 10, 2012 at 8:44 PM

Rachel Parys said…
That is so pretty! Love the Japanese writing, so cool! I too have been itching to get some more Wryns and Saturated Canary stamps. I haven't bought any SC stamps yet, simply because I can't stinkin' choose!!(all sooo cute!)

I like digis, but because they are tucked away in the computer, I forget what I have!!lol I guess I need to print several out, or make a paper file, or something I can actually touch???
February 11, 2012 at 6:42 AM

Lorraine said…
Very pretty, Eva! Love the washi paper pieced umbrella and the metal embellie. And I did not notice the different u characters until you pointed them out, lol.
February 12, 2012 at 5:34 AM

Creations by Shirl said…
Such a pretty card Eva.... the paper piece umbrella is awesome with the washi bg papers too. Yes aren't those digi's addicting? Cheaper than buying rubber and having it stored and using them a couple of times....LOL!
February 12, 2012 at 6:19 AM

Jen Shults said…
This is just adorable! I love that cherry blossom paper! Thanks so much for joining us for this week's sketch!
February 14, 2012 at 10:37 AM

Arielle H Gordon said…
This is such a gorgeous, adorable card! Great job with the sketch, thanks so much for joining us at the Deconstructed Sketch this past week!
February 16, 2012 at 7:29 AM