By eva April 15, 2012
Hi!  Hmmm, this may be a longer than usual post as I think I may have gone a little overboard participating in The Greeting Farm's April Customer Challenge over on SCS.  I think because I had a little crafting mini break that I tried to make up for it by making 3 cards over the weekend.  I'll be sharing all 3 in this post since the deadline for this challenge is Monday.  The challenge is create a card inspired by a Musical Play or a Musical Movie. 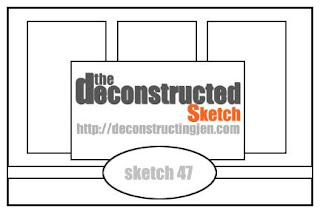 For the first card, I followed sketch #47 at The Deconstructed Sketch. 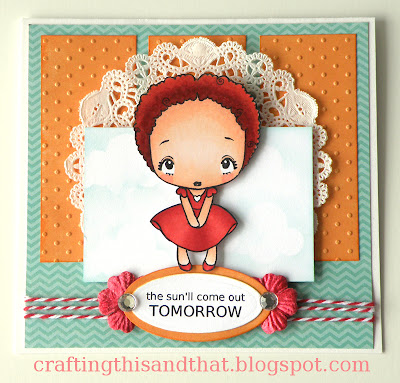 When I was a kid, I loved the movie Annie!  I loved the songs and everything.  So this is my version of it.  I used TGF's Stella (body) and Nahla's head. 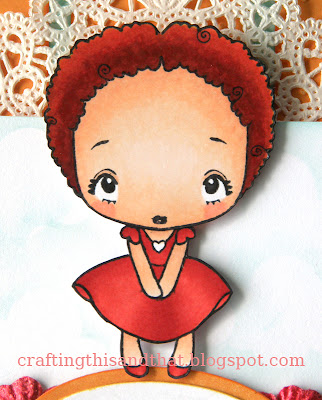 I'm thinking she looks kind of sad but maybe hopeful too?  I ended up cutting off her little pigtails and wiping away Stella's envelope in her hands. 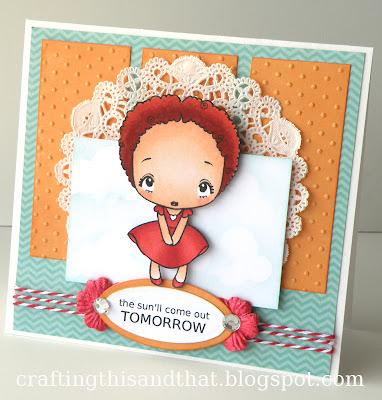 It's hard to tell but I did sponge on some clouds behind her but the lighting makes it look like a plain piece of white cardstock. 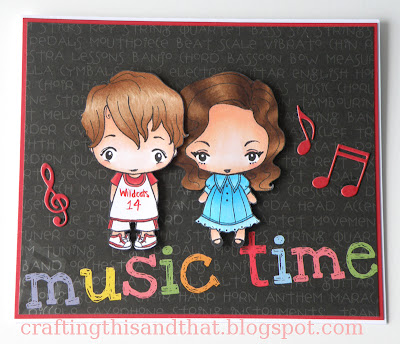 Can you guess this one?  High School Musical!  My kids loved those movies.  I'm sure we'll re-watch these movies when my youngest gets into them.  My older son loved the songs and tried to imitate the dance moves.  Ha!  Still cracks me up when I think about it.  I think he likes singing and so next school year, I'm having him sign up for the school chorus. 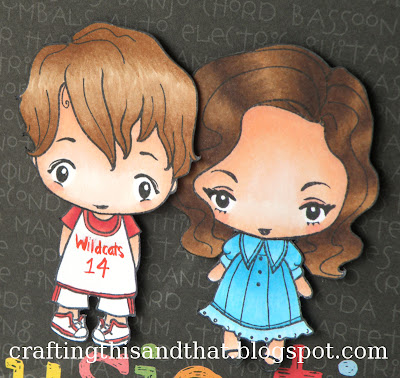 So Troy is a mix of TGF's Paul and Dylan.  I wiped away the original number that was on the shirt and put Troy's number instead.  And Gabriella is a mix of Odette and Miko.

The paper is some older school themed stack that I had.  Simple card.  I added some musical note die cuts from My Favorite Things. 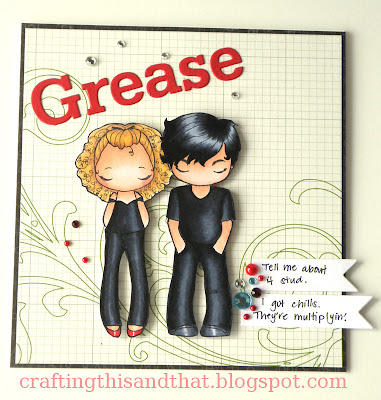 The last card I made was inspired by Grease, one of my favorite movies and really, the original High School Musical.  I love the end of the movie and that's what I wanted to portray in the card. 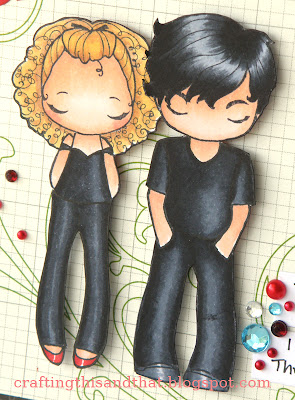 This altering took some doing!  I wasn't sure if I could pull it off but in the end I love how it turned out.  Sandy is a combination of Miss Anya Love (head and shirt), part of the pants from Miss Anya Autumn and the shoes were from another Miss Anya from the Love set.  I used my light box to trace the pants and make the pants longer actually.  Danny is from My Guy Ian.  I just traced in the outline of his shirt using my light box instead of having the original patterned shirt.  I was worried it would look weird but since I had to color them in black anyway, it hid a lot of the mistakes! 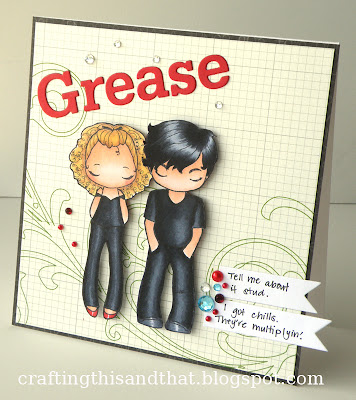 I added in the first couple of lines to the song, You're the One That I Want.

I didn't spend the whole weekend making these cards though.  I actually had time to do the usual amount of laundry and then some since I cleaned out my kids' rooms and did some vacuuming too.  Plus I have 2 sick kiddos.  My oldest seems okay but my youngest has a super high fever so I think I'll be heading to the doctor's tomorrow.  He has already peed in his bed twice since being sick so that has added to my laundry load as well.

Creations by Shirl said…
Somebody was very busy crafting over the weekend huh! Love it!
Great swap on the heads it turned out awesome... great images and coloring on all cards perfect matches to the themes you used too.
Great job Eva..
Have a great week!
April 16, 2012 at 5:21 AM

Cheryl said…
Wow, fabulous cards! Great job on the clothes/characters! OK, I feel old, loved Grease, don't know too much about High School Musical. Awww, hope your guys are feeling better soon. Crossing my fingers that we all don't get sick again too, finally our household seems well after all these months!
April 16, 2012 at 7:49 AM

Rachel Parys said…
Sorry to hear about your kiddos! Hope they are feeling better soon!

I can't believe this cards!!!AWESOME! I ran out of time and didn't get to participate in the challenge. Annie-never would of thought of that in a million years! So great! High School Musical-perfect little sprouts to portray Zac and Vanessa! Love Grease! I laughed out loud when I saw that, your details are perfect! Those sentiments are brilliant! Great work lady!!!
April 16, 2012 at 12:59 PM

Lorraine said…
Wow, girlfriend, you were busy this weekend! I had a rotten weekend w/ no crafting, lol. You on the other hand made these fab cards! I love them - my fav is the last one since I love Grease! Your coloring is stunning as always! Hope your two are feeling better today - esp the younger one. Take care!
April 16, 2012 at 7:24 PM

Arabella said…
Eva these cards are awesome! Your altering is so creative! I love all three of them!

RiNNE said…
love the cards! I think they signify those movies perfectly! :) the Grease one is super cool in their awesomely colored black outfits!
April 17, 2012 at 1:05 PM

Leanne said…
Whoa!! All of these are super creative and imaginative. Luv them all and the details... Woo Hoo! They are fantastic! I think my favorite has got to be Grease. It totally looks like Danny and Sandy!!
Great job Eva!!! These are really awesome!
Hope the kiddos are doing well.
;)
April 19, 2012 at 8:02 AM