By eva October 28, 2015
Hello!  Today, I did a little bit of crafting for fun.  I have a couple of projects in the works for my kids that I'll share when they are done.  I also did my usual chores and meal prep.  But realized I couldn't cook dinner early today because we have absolutely no room in the fridge to put a large pot of chili in when I'm done cooking it.  So I guess that'll have to wait for later this afternoon after I pick up my 2 out of 3 kids from school.  Wednesdays are interesting because I have to make multiple trips out of the house for pick ups at different times.  Just thinking about it makes me wanna take a nap!  But instead I ate some pie.  In case you are wondering, my 3rd child will get picked up by my hubby.  Don't worry, I only forgot to pick up one of my children once the whole time I was a parent.  That's not too bad, is it?  Oh, and once I overslept while napping which is why I don't nap much during the day anymore.  I was relying on my son who was just a few months old to wake up crying from his nap to wake me up but of course that would be the day he decided to play quietly in his crib.  I kind of shot up out of bed, grabbed him and rushed out the door!

Well, it's almost Halloween and my youngest still likes to pass out treats.  The past couple of Halloweens, we've been giving out glow sticks to his class.  This year we're giving glow sticks again but just dressed up differently. 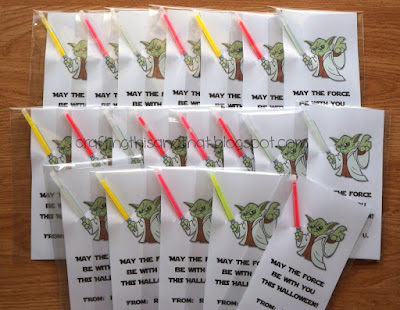 I had seen some ideas like this floating around blogland.  I think some people used this idea for Valentine's Day as well and used lollipops or other stick candy.  I just found this Yoda image online.  I think it was a sticker or something.  I broke a couple of glow sticks while doing this too and had to print out the paper a bit long to cover the rest of the glow stick.  I used a bit of washi tape on the back to keep the stick from shifting around too much.  But of course, Star Wars purists (hubby & children) will criticize my treats and say Yoda doesn't have an orange, yellow or white light saber.  Blah, blah, blah.  Don't really care.  The point is to pass out something fun to the kiddies. 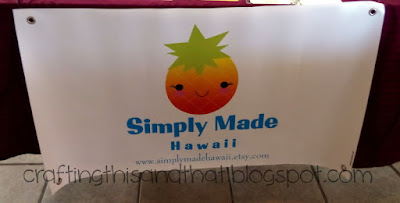 Hey, I forgot to share my new banner I use at craft fairs!  I guess regular paper in a sheet protector and taped to my tablecloth was kind of lame cause it kept falling down!  I got this banner at Vistaprint and it was pretty affordable too.

Okay, I think I will finish up some more crafts today.  Oh, and next time I'll share the reindeer tags I made.  I did end up making all 24!  Thanks so much for stopping by!

Cheryl said…
Cute glow sticks! Star wars fans are serious! It was kind of funny at the star wars concert. There were storm troopers and other characters standing around in the lobby so I took a photo of the kids with them. Then my husband wanted to go back so he could take a picture of himself with the storm trooper too! I think overall more adults wanted photos with the characters than the kids! Nice banner! Very professional!
October 28, 2015 at 1:58 PM

Denice said…
These treat bags are adorable, if my youngest was still in grade school I'd be making them for sure!
VistaPrint is wonderful...and I agree, great prices. Yep, your sign looks very professional.
October 30, 2015 at 2:30 AM