The start of a mini album...

By Cheryl July 16, 2010
that might take me a long time to finish, so I'm just going to post the 2 pages I've done so far. I put these away while I made the birthday cards since those actually had to be sent off by a certain date, so hopefully I can get back to this at some point. I still have all my Disneyland summer vacation photos to go through too!

Anyhow, during Natalie's first year, I tried to take a monthly photo with the same teddy bear so this is going to be the collection of all of those pictures. At least I know there will only be around 14 pages. 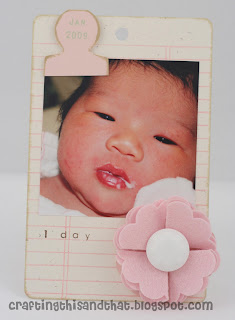 I used the Library Ledger mini kit from PTI, minus the patterned paper which is mostly in shades of blue. I stamped all the backgrounds in Sweet Blush on Rustic Cream cardstock. It took me a while to get the hang of lining the background stamps up nicely, good thing the photo covers most of the page (excuse the big face and messy mouth photo, but I didn't really have as many pictures to choose from as I thought). The words are from Simple Alphabet, maybe I should have actually stamped "1 day old" but it takes me forever to get the letters lined up straight on the block, so the less words the better. I think I'm going to aim for 1 main embellishment per page, hopefully I can manage to think of 14 separate embellishments.

The flower idea came from here using the Beautiful Blooms die. Except my felt is not as nice and fluffy as PTI's. I think I got mine either at Michael's or Hobby Lobby, it was on sale, but technically only like a few cents cheaper than the regular price. The regular felt looked a little fuzzy, so I got the "stiff felt" which yes, is pretty stiff, so it looks more like folded paper or something. I think I want to try the vellum flower next, minus the Glimmer Mist, which I don't own since I can just imagine my son asking "let me try" and making a huge mess. The page looks a little bare, but I couldn't think of anything else to add so I just moved on to the second page. 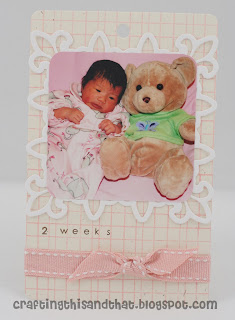 The photo is a little big since I printed everything at 3x3 and didn't particularly plan on using this fleur de lis pendant from Spellbinders until I saw it lying around. I was practicing cutting with the pendant because it was kind of difficult at first for all the little pieces to cut out nicely until I shimmed it with a piece of cardstock. Ha ha, I even used another piece of scrap ribbon and again, it matched pretty well so I'm glad I saved it! Again, simple, but I think at this point, my goal is to just get it done.