By Cheryl August 26, 2010
This was my attempt at a male birthday card. I'm going to stop prefacing with "simple card" because that's how all my cards seem to be turning out. I like looking at other people's detailed projects, but I have no idea how people come up with all those ideas. I found a blog recently with a lot of cute mini albums and embellishments here. Plus she gives really detailed instructions about how to layer everything that I'm thinking at some point I might want to try it.

But in the meantime, here's my card. Mostly I wanted to try using my Library Card stamp from PTI and the matching library card pocket die. 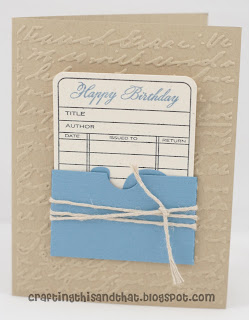 I embossed the kraft card base with a cuttlebug folder. The library card is stamped on rustic cream cardstock, then cut with my paper trimmer, then the corners were rounded with the small EK success punch. The "happy birthday" stamp is from Birthday Basics from PTI. I used a Versamagic chalk ink in Aegean Blue. I actually found a piece of Bazzill cardstock that matched the ink color pretty well. I'm not sure of the color name, but probably something discontinued since I picked it up at the Bazzill warehouse sale about 2 years ago. That was a fun sale, I think it was also the first time I bought a bunch of pink cardstock. Up until that point I felt stuck with blues and greens trying to do my son's scrapbook pages. I got 2 pizza boxes full of cardstock, along with chipboard albums, mini albums, brads, an idea book, a patterned paper stack, I can't remember what else, but I still have a lot of stuff left to use up. 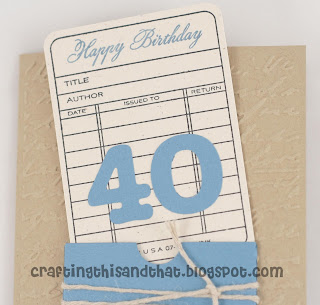 I die cut numbers again from my sizzix font set. It took me a while to decide where to put the numbers, pocket or library card. But then I had a hard time deciding what other color to cut the numbers in so I just stuck it to the library card. Then I just looped some string around the pocket. Hopefully the pocket didn't fall off in the mail because the string made it kind of lumpy and I put the adhesive on after tying the string and it wasn't easy to hold the cardstock flat to run the tape runner over. Maybe I just need to use glue next time. Anyhow, that's all for now.