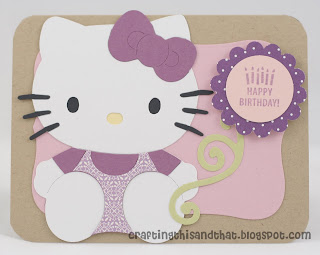 Here's a pretty simple birthday card, actually I guess all my cards are pretty simple, because after putting together the Hello Kitty, I was exhausted! The Hello Kitty is from a Sizzix die, paper pieced using PTI plum pudding cardstock and patterned paper from one of the paper pad collections. I tried paper piecing the whiskers on this one, it was a little easier since the Hello Kitty is rather large. She is supposed to be holding a "happy birthday" flower. I used a swirly border die for the stem. The sentiment is a Stampin Up stamp, plum pudding ink on sweet blush cardstock, don't know why I picked that color. And I don't know why the bitty dot paper looks like a slightly different color than the plum pudding cardstock, but they seem to match better in person. The background is lavendar moon cardstock cut from a Nestability label.