By eva September 22, 2012
Hello!!  Exciting news to share today as Yumi & Fumi Handmade have yet another cute release called Kigurumi Kids!!  Not sure what that is?  Here is a little description:

A type of cosplay that employs a full body suit, similar to a fur suit. It is most commonly used with animal costumes but can also be worn to emulate people, mechs, mascots, etc. Kigurumi are dressed in character from head to toe. They usually wear masks that encompass their entire head rather than just their face. Characters like Mickey Mouse from Disneyland and Barney from Barney the Dinosaur are referred to as Kigurumi in Japan.

Kigurumi is a part of Japanese culture, which represents performing people who dress up like popular cartoon characters. The word is actually a combination of the Japanese words kiru (to wear) and nuigurumi (stuffed toy). Often seen in places like anime conventions, theme parks and even shopping malls, a kigurumi costume always adds to the festivity of the occasion. Even from American culture, things like football mascots and Winnie the Pooh can be worn and considered kigurumi suits. There is no limit, in fact, to the amount of things a kigurumi costume can be. Their range often includes:

Let me share a couple of projects with some of the new images. 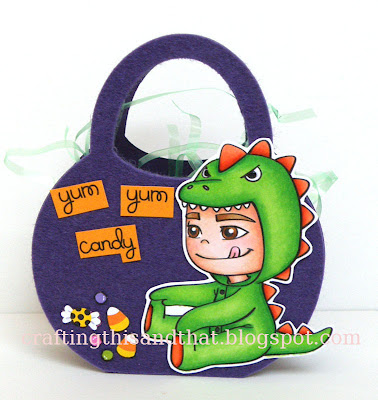 This is Chasezilla!  Isn't he cute?  I added him onto this little treat bag which is made from PTI felt and dies.  I cut out the little pieces of candy and the sentiment from some Halloween papers I had. 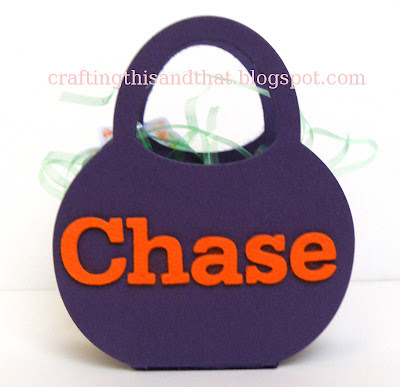 This is the back.  I added his name in felt.  Thank goodness his name wasn't longer otherwise it wouldn't fit. 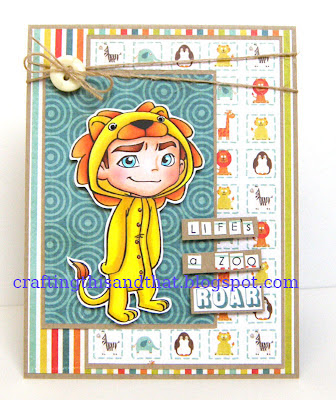 This is AJ Lion.  Doesn't he look all disgruntled?  Or maybe his mom made him wear that costume or something.  Hahaha.  Anyway, these are perfect for non Halloween-y cards too!  I thought of the sentiment since well, life really is a zoo, isn't it?  It's so crazy that sometimes you have to scream.  Hahaha.  Well, I don't but I feel like it. 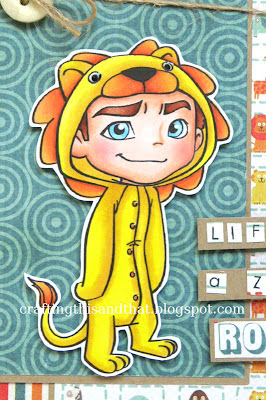 Like today for example, I couldn't line up in the pick up line since it was so long already to pick up my son even though I was early.  So I had to park the car though the parking lot was super crowded and I had to squeeze my car in.  Had to go to my kid's class to wait to get him and finally we're on our way to pick up my daughter.  It's starting to rain/pour.  There's a bit of traffic to get onto the freeway but once I'm on it's clear.  But I only get to zoom on for a couple minutes before having to slow down and I realize there's traffic!  Slow moving, car crawling traffic!  Ugh!!!  Twenty minutes later I pass the accident.  Then zoom on to hit more traffic!  Finally off the freeway and thankfully there is no traffic at my daughter's school.  So it took me 40 minutes to get to my daughter's school which usually takes 10-15 minutes.  Then we're off to pick up my youngest.  By the time we get home, my butt is half asleep since it's been almost 2 hours since I started my pick up routine.  But I have to remind myself not to get so worked up especially when I'm driving.  Gotta pay attention to the road and watch out for other stressed out drivers.

ANYWAYS, sorry, longer post than I thought!  The Kigurumi Kids are available in the STORE now!  Please check out Yumi and Fumi Handmade Crafts to see the rest of the release and the awesome DT creations!  And we have a special guest too so please hop over there.

Thanks so much for reading!

Rachel Parys said…
Just take your frustration out on your markers and paper!! lol! Love the sentiment on the second card, it's soooo true!!!
September 22, 2012 at 8:07 AM

Cheryl said…
Cute treat bag! The candy bits are cute! I was wondering who Chase was, guess I didn't read carefully. Nice coloring of the lion. The zoo paper is so cute. Yeah, I can't stand traffic. It's actually not too bad here, although so many accidents sometimes. I hate it when it's stop and go on the freeway and the person in front of me is driving a huge SUV or something where it's hard to see the other cars in front and then they accelerate so fast, then stomp on the brakes all of a sudden.
September 22, 2012 at 4:22 PM

Alyce Kit and Clowder said…
Awww love these eva!!! The little bag is just too cute And that lion is sooo adorable!! ugh don't you just hate traffic!! boo
September 23, 2012 at 2:54 AM

Leanne said…
Wow!! These are awesome Eva!! The treat bag and Chasezilla are so cute! Great colors! Aj Lion does look a bit disgruntled, I guess he was hoping for a cool Godzilla suit. That sentiment really does relate!! Traffic is the worst and that's coming from a girl who lives in Los Angeles. Just take a breath.
Hugs
;)
September 23, 2012 at 5:26 AM

Mimi said…
So cute Eva!! The fun colors you chose are perfect! awesome coloring job!! I know how you feel about traffic and school... every school morning I'm in it! Yes, good advice to just ease up and watch for other stressed drivers! Have a wonderful Sunday! ;D
September 23, 2012 at 8:54 AM

RiNNE said…
Uggh, traffic sucks! so sorry it took you so long! I've forgotten how bad traffic gets in Hawaii :). Stellar card! Love your coloring!
October 7, 2012 at 6:35 PM

Lorraine said…
Aw, these are just adorable! I especially love the little favor bag! and your coloring is bright & gorgeous as always!
February 10, 2013 at 4:11 PM