By eva October 15, 2013
Hello!  It is a review day over at CC Designs.  We're reviewing a bunch of different stamps today so please head over there and check them out.  I made a couple of cards using Roberto's Rascals stamps. 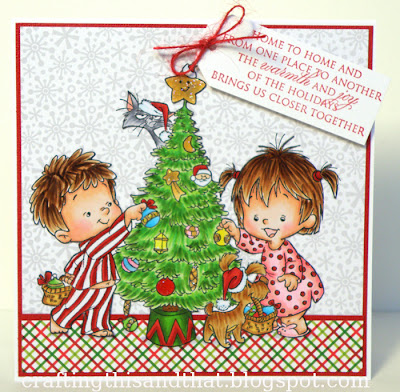 This first one features Merry Christmas.  It's a fairly large image so it fills up the whole space!  The sentiment is from AmyR's Scripted Greetings and Fanciful Christmas. 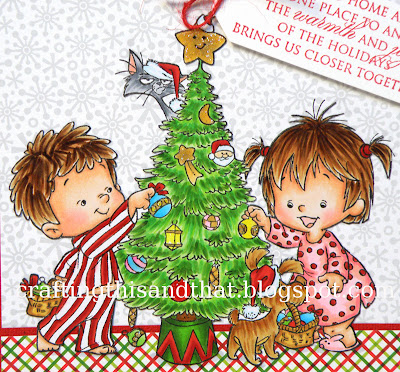 I actually fussy cut all around the image and cut out even some of the tiny white spaces.  I cut through the girl's pony tail and then through her wrist to get to some of the white spaces.  But once you glue the image down flat on the card you can't even tell where I cut.  And the grouchy cat makes another appearance! 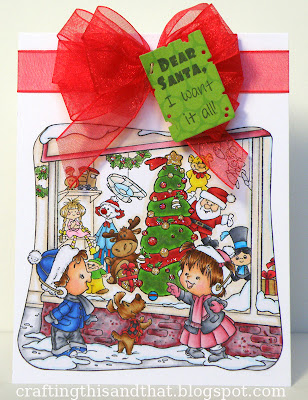 This is my second card featuring I Want That.  Holy smokes, this took me forever to color!  So much details on this image that I kept the rest pretty simple.  I made a big bow which is mostly by accident.  I made the smaller one in the front first then thought that was too small and made a larger one.  Then I stuck on the smaller one on top the bigger one so it would look fuller.  The little tag was made using the Grunge Envelope die.  The sentiment is from Funny Christmas Sayings. 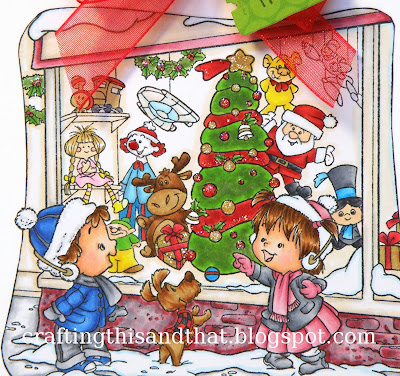 Here is a close up.  This stamp along with Henry Claus are special Toys for Tots stamps with 30% of the proceeds going to Toys for Tots.

Blankina said…
sUCH A CUTE CARD eVA!!Great image and sentiment. Why don't you link it up at YUMI FUMI-ANYTHING GOES??

Rachel Parys said…
These two are so adorable!!! I can't believe you fussy cut that, I would have went nuts trying to do that! lol! These are both super cute! Fantastic work!
October 16, 2013 at 5:12 AM

Cheryl said…
Super cute cards! Geez, that's a lot of fussy cutting! Looks really nice! Neat coloring, love your brick wall! OK, now I got myself into trouble volunteering for Halloween stuff...still trying to start that before I can think of Xmas...
October 16, 2013 at 11:31 AM

Denice said…
Both of these cards are adorable...lot's of time went into each one! As times consuming fussy cutting is...the results always pay off with fab results!!! Great cards.