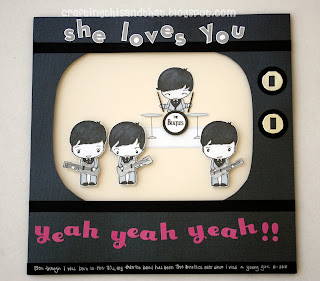 I really wasn't going to enter this challenge over at Club Anya and Friends but I had this idea in my head and I knew that if I didn't try it, I'd regret it later.  This is a 12x12 layout and I really wasn't intending it to be so huge.  I thought I'd make a little card but somehow it expanded to this especially because I wanted to recreate watching The Beatles' appearance on the Ed Sullivan Show so many years ago.  I haven't made a scrapbook layout in a while and I don't usually do a topic about my likes but I like how this turned out. 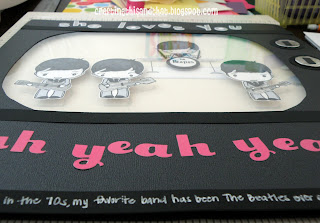 I used acetate (again!) to create the idea of a TV screen.  I wrapped some circular card stock with aluminum foil to make little dials and stuck on/glued some alphabet stickers spelling out some lyrics.  I was getting tired of the monochromatic gray, white, black theme (B&W TV back then) so I had to add some bright pink in there.  I put a little of strip of journaling on the bottom with my white gel pen. 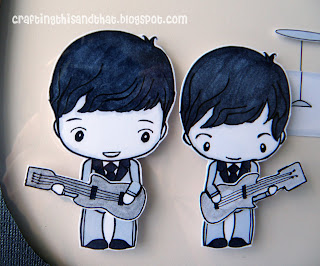 Here's a close-up of Paul & George. (You can see me in the photo taking this pic!).  I used Dressy Edward for all of their bodies and the top of Birthday Boy Ian's hair for all of them too.  Paul has Dressy Edward's face shape and I drew in some eyes similar to Edward's opened eyes.  I hand drew the guitars and their little hands.  (Paul is left-handed).  Trust me, I'm not a drawer and it took me a few tries to get it okay looking.  I drew in part of his mouth and drew in the bangs of his hair.  George has Mer Ian's face and the sides of this hair and I drew in the bangs. 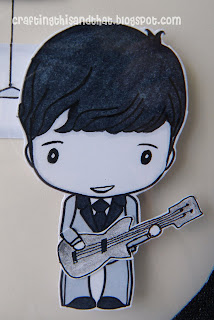 Here's John.  He is similar to Paul but I drew in eyes that look like Mer Ian's.  Paul, George and John are all popped up higher to look like they are in front of Ringo. 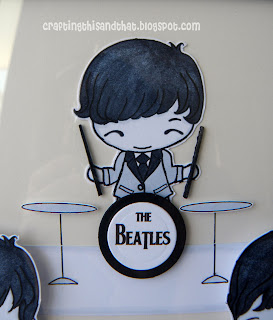 And this is Ringo.  Birthday Boy Ian got a drum set for his birthday.  I found a free "Beatles" font online, printed it, and cut it out with my circle nestabilities.  I layered it and popped it up with a dimensional.  I made simple cymbals just by using the shape tool on MS Word and print and cut and popped up too.  I just drew in lines for the stands.  The drumsticks are toothpicks I cut and colored with my Copic pen.  I had him on a platform like they did for performances.  I also changed his bangs to look more Beatles-like.

All in all, this was a pretty challenging challenge.  I really wasn't sure about the altering cause I've never done it before and how to draw in the missing parts.  I don't know how to color black hair well without it looking like a big black glob either.  Well, thanks for reading this kind of long post.  Happy Mother's Day!

Cheryl said…
So cute and creative! Love the TV! And super nice drawing too! So talented! The hands and guitars look great! I'll go comment in the gallery too!
May 9, 2010 at 12:24 PM

Amy said…
Excellent, excellent altering! The Beatles look so fab, you did an awesome job with this challenge! Love it!
May 17, 2010 at 6:35 PM