By eva May 16, 2010
When my youngest child turned one, we had a Sesame Street themed party for him.  He didn't particularly like or dislike Sesame Street but I had just seen on a blog some Sesame Street characters made from punched scalloped circles.  They were so cute!  So I had to search around the internet for more ideas about this and Splitcoast Stampers had a lot.  This was one example. 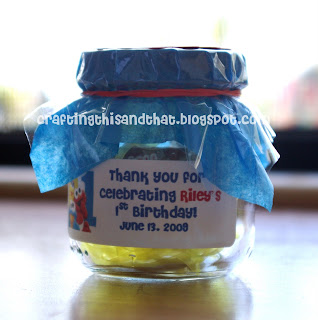 So these were the favors I made using baby food jars.  They were filled with colorful Easter grass that I bought at Target and the top was wrapped with tissue paper and cellophane and tied together with rubber bands.  I had to find something small enough to fill the jars too and bought little bags of kaki mochi. 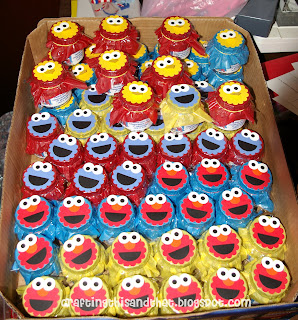 I made about 70 of these.  I already had most of the punches.  The only one I had to buy was the one for the whites of the eyes.  I thought they looked very happy. 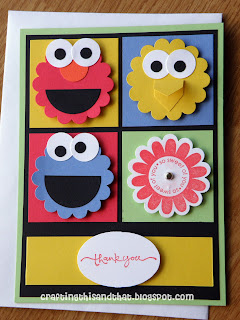 I made this card for Cheryl using the idea from the link above since I had some leftover characters. 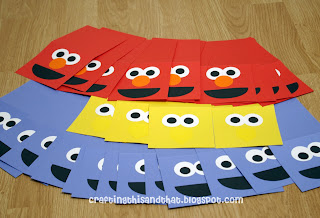 These were the Thank You cards I made for everyone else.  I think they were 3x3 cards.  A week or so after the party I noticed our local Ben Franklin craft store had an ad featuring Sesame Street character punch art.  What a coincidence!  I guess the idea was popular at the time.

I'm almost done with the end of the school year projects so hopefully I can share that soon instead of posting my old stuff.  Hope everyone has a great week!

Amy said…
OMGosh, these are the cutest party favors and cards! It's amazing you made them all out of punches, they look just like the Sesame Street characters! I can't believe you made 70 of the favors...wowzers! :)
May 17, 2010 at 6:18 PM