By Cheryl October 24, 2010
Can you believe it?! I actually colored another one! This is an Amelia I bought a while ago, again from that sale at Die Cuts R Us where I stocked up on TGF stamps. I didn't even ink her up until yesterday...I'm such a collector...and I can't resist a good sale. I'm going to try and upload it to the Club Anya WTW Prismacolor gallery later. 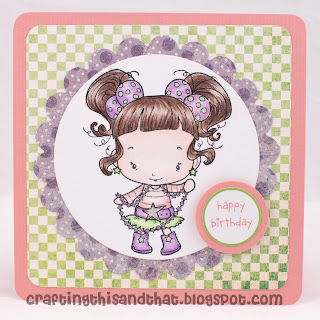 Anyhow, I actually tried to pick my papers beforehand this time so I could pick corresponding colored pencils. It was an old Basic Grey collection pack, called Oh Baby Girl which I used previously on a baby board book, plus now I had some matching Bazzill cardstock from Embellish It. Except I didn't quite decide on the specific papers until after I colored and then ended up using the most basic patterns in the pack. And now I've forgotten what color pencils I used for the outfit, I think the accessories were Violet. The hair was Dark Umber and Dark Brown. I used Club Anya Jen's suggestion for the skin color, Light Peach for the face, Peach for the outer face, and Blush Pink for the cheeks. I used baby oil to blend, which I think sometimes doesn't dry completely clear, or else my blending stump was a little dirty, but there's a little streak in the middle of the face, which might not be too obvious in the photo. Initially I colored the necklace Violet, but everything seemed a little too purple so I colored over it with my Gelly Roll Stardust pen, which I also used on the star buckle. 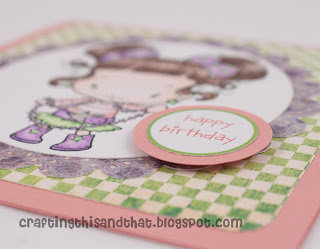 I couldn't find a coordinating stamp pad in my collection for a sentiment, so I typed one up. The font is CK Cute, I might have gotten it from a free font Friday from the Creating Keepsakes website, I can't remember. I actually scanned a little piece of the cardstock and patterned paper so I could sample the color for the text and green circle, then put it together in Photoshop Elements, and printed it out. I pretty much left it at that, maybe it could use some kind of embellishment in the corners, or with the sentiment, I don't know, I didn't want to stick something on, then decide it looked funny afterward.
Eva, you're so great with making all the seasonally appropriate Halloween stuff. Which reminds me that I still have to buy some Halloween candy and a pumpkin from the grocery store...hope there are still some left.