By Cheryl October 23, 2010
I was so excited to see a Prismacolor pencil tutorial on the Club Anya blog done by Jen here. I decided to get colored pencils way back when, even though they're not as popular as Copics, because the cheap side of me won out when I was able to use a 40% off coupon at Michaels for a set of pencils. Since then, I never mastered colored pencils, so I didn't think it would be wise for me to invest in Copics.

Anyhow, for my first coloring attempt, I used the same Ebony image from Jen's tutorial (I believe I got my stamp from a Die Cuts R Us sale a while ago). I pretty much copied everything she said in the tutorial, using all the same colored pencils for the hair and clothes. It's baby steps for me, I figure I'd better start with following the tutorial before trying to branch out on my own. The tricky part for me is figuring out where the highlights in the hair belong so I wanted to use the same image to be able to follow her example, except it didn't turn out as nice as hers. Somehow my Ebony also looks like she has some gray hair. I couldn't quite find the same blue pencil she mentioned so I just picked one that looked relatively denim like. And I also used baby oil instead of odorless mineral spirits.

I wasn't really planning on making this image into anything, I actually colored her on some scrap cream cardstock that had something else stamped on the other side. But after all that coloring work, I didn't want to toss it aside. So I just stuck it to a card front. I printed out some digital paper from Designer Digitals, Mindy Terasawa's Crazy Beautiful kit (the black polka dot paper for the scalloped rectangle and a floral pattern). Then finally used my Tim Holtz mini stapler. It took me forever to figure out how to load the staples. 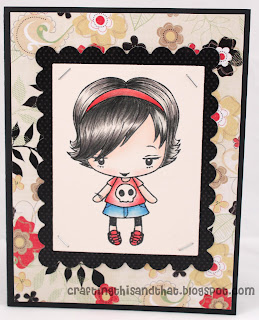 Then I colored Ebony again, this time with brown hair. (I did try two different characters with different hairstyles which I might post later, I think I have to tinker with the hair, those darn highlights! Plus I better start looking at matching patterned paper rather than just randomly coloring). Again, used some digital patterned paper from Designer Digitals Mindy Terasawa's Noir et Blanc kit and some Papertrey ink hibiscus cardstock. I die cut the circle from a Quickutz set that I bought a really long time ago and used the matching rub-ons. I added little jewels to the flower in the center, which conveniently happened to fit exactly within the flower petals. 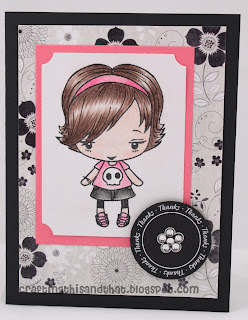 Well, that's about it for me. I think I need to go clean off my craft desk and reorganize. I'm so messy, I have half finished stuff scattered all over the place.

eva said…
i like these! i think you did a great job with the hair! yeah, i sometimes feel like when i color black hair that it looks like gray hair. i'm glad you got a chance to post something too.
October 23, 2010 at 8:18 AM

Linda said…
You did an awesome job on your two cards! The coloring is fantastic! Have a great weekend you two!
October 23, 2010 at 9:12 AM

Cheryl said…
Thanks guys! Eva, I don't know where you find the time to make all these cute crafts! I didn't realize it had been last month since I last posted something, but that sounds about right for me. Hopefully I can finish more things this week...maybe.
October 24, 2010 at 4:31 AM