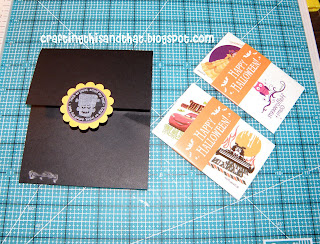 I don't know what this kind of a card is called.  I saw it originally HERE last year.  It was made to hold giftcards and I really liked the idea of how the GC would slide out.  It is similar to the one Cheryl made and blogged about HERE.  That tutorial was from Dandelion Designs.  Anyway, I couldn't find any directions on how to make it so I just stared at the pictures on the blog until I got the general idea.  So I altered the dimensions of the card to hold the tattoos above instead of a GC. 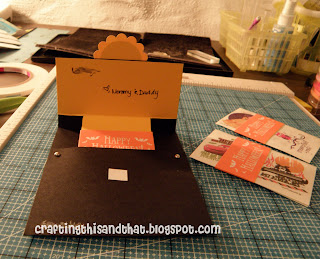 I made it for my older son last Halloween so that when you open the flap the tattoo would slide out.  The tattoo was held together by a band that said "Happy Halloween."  Bought a whole bunch of these at Walmart. 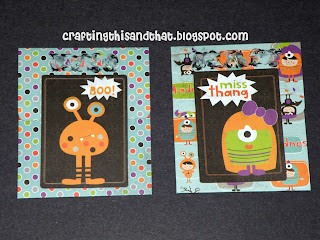 I thought I'd make a couple more this year.  I blurred out the names of the kids so they can be surprised if their Mommy happens to be reading this post.  Paper is from Bo Bunny. 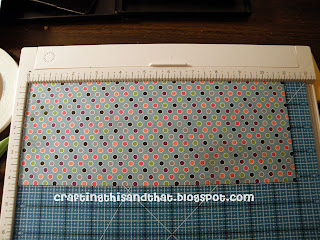 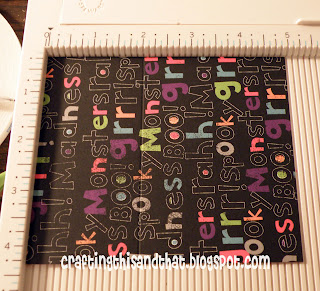 I cut a smaller piece 4.25 x 5 inches and scored that at 2 inches from the left. 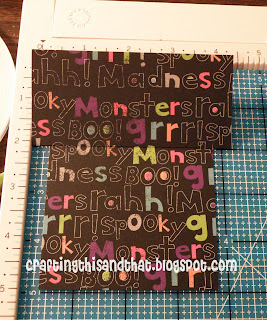 I cut about 3/8 inch off the sides up to the score line to make like a "T" shape. 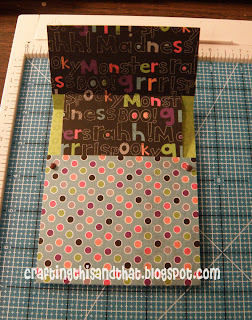 Tape the top rectangle of the smaller piece onto the inside of the larger one as shown above.  I also put a small purple brad on each side to close the bottom flap over the smaller piece of cardstock.  I guess you could also just tape it down.  I covered the ends of the brads on the reverse side with a stripof cardstock too so it wouldn't spin around so much. 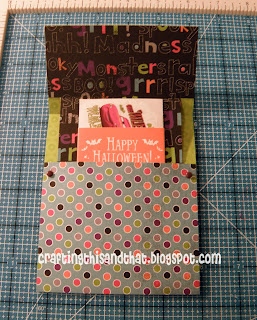 Tape the tattoo on the small piece of cardstock so that when you open and close the top flap the tattoo slides in and out. 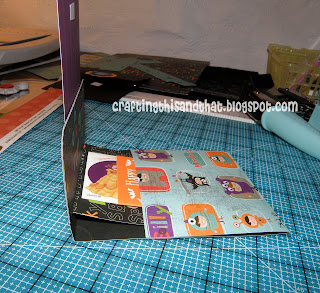 Here is another view of the card.

These were fairly quick to make since I had the one from last year to measure.  It's a good thing my son keeps everything.  It is easy to alter too for whatever you want to place inside and can be embellished how ever you want.  I didn't do any stamping or coloring, just cut out the cute monsters that came in this Halloween line from Bo Bunny.  I bought them on sale at Ben Franklin.  Too cute!

Thanks for reading and have a great day!

donna mikasa said…
Wow...you make the coolest cards, Eva! Thanks for sharing the measurements and the photo tutorial, too!
October 20, 2010 at 11:19 PM