By Cheryl April 17, 2011
Where has the weekend gone?  I can't believe it's almost Monday again!  I only managed to make one card, and a pretty basic one at that.  It's based on the Which One Wednesday sketch this week at the Farm Fresh Challenge blog. 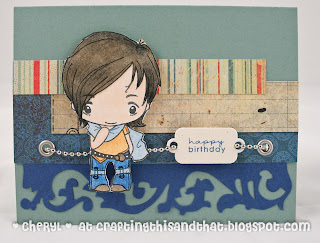 Since I already had my Basic Grey Recess papers and somewhat matching Prismacolor pencils out, I used that paper pack and color scheme again.  The cardstock is Papertrey ink.  I actually remembered to look through all my things to try to use something I haven't yet and picked out this scroll die cut edge from a Tim Holtz die.  I also picked a boy image that I haven't stamped yet, I had actually forgotten that his name was Eric but found it out there somewhere on the internet.  I think I have to practice hair coloring on every single stamped image and make a little reference book or something because every time I see a new hairstyle it messes me up! 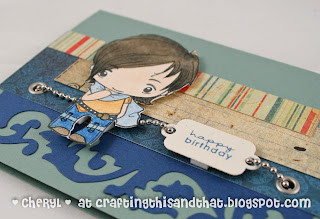 The sentiment wasn't actually part of the sketch, but I wanted to stick one on somewhere, so I moved Eric over to the side a bit.  I used the "happy birthday" from PTI's Tag-It's set, again.  And the tag is from a cuttlebug set of tiny tags.  I've been wanting the PTI tiny tags die, but I guess I should be satisfied with what I already have, even if they don't come with coordinating stamps... :-(

I also found this beaded chain thing I bought a while ago, I think from that Bazzill warehouse sale.  I didn't have anything in mind to make with it when I initially bought it, but it was on sale!  I thought it might match this time on a boy card.  So I used those eyelets again, I think they set a little better this time.  Then I strung the tag on.  The foam squares on Eric and the tag help hold the chain in place.  The only problem I'm having is deciding what to do with the ends on the inside.  I don't really want to cut it because it could still be useful as a necklace.  I might just tape it all down on the inside, then it could also be re-used as an embellishment.

I almost forgot, but as a sidenote, I started labeling my photos and posts, just so people who want to communicate with Eva are getting to the right person.  Or maybe if some challenge blog thinks Eva is entering twice or something, in the event that is not allowed.  Whatever the case, 99% of the posts are going to be by Eva anyhow, so I don't think it will be too much of an issue.  But it did give me a chance to play with a fun free action (from ages ago though) from Atomic Cupcake to make our names!

Cheryl said…
Are you using the new blogger editor? I changed it in the settings on mine, I don't know if affects yours too. I changed my name image size to small, by clicking on the picture, but I think yours looks about the same size as mine.
April 18, 2011 at 7:28 AM