By eva April 13, 2011
I would say "hate" but I know that's a strong word and the kids in my son's kindergarten class always say "but they're nature."  Well, that's one part of nature I really could do without.  I'll explain my dislike of bugs later.  It has to do with my project.  Anyway, I thought I'd participate in TGF's Farm Fresh Friday Boy Challenge and finally make my youngest his shadowbox frame to hold his baby hat that he came home in from the hospital.  It's not too bad that it took me almost 3 years, is it?  I have made my older two similar frames. 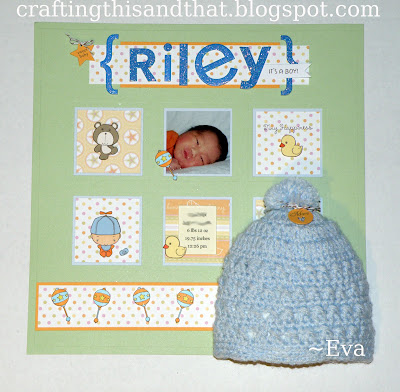 It's been a while since I made something like this.  This is a photo before I placed it in the frame.  I used TGF's Oh Baby set.  I've used this set before and I think the images are super cute.  I had bought this matting from years ago (so I don't know if they still sell it) and I bought one in pink for my daughter and a blue one for my son.  There's 2 sets in one package so I was lucky that I had an extra one for my youngest cause who knew I'd have 3 kids.  The matting comes in different designs too.  One like above and another that can hold a 5x5 picture in the middle.  I really wanted to use a larger picture but for the life of me couldn't find my son's 5x7 baby pic!  Like where did it disappear to?  I searched all over and could only find a wallet size and an 8x10.  But this layout allowed me to use more of the stamp images. 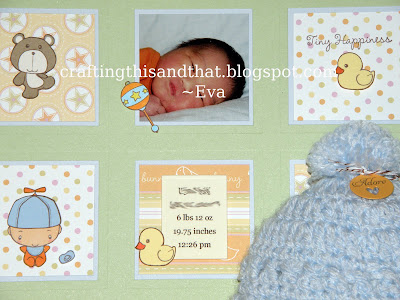 Sorry, had to blur some of the personal info cause you can never be too safe these days.  The bear and little boy are paper pieced.  I printed my son's info out and also placed most of the images on dimensionals.  The row of rattles on the bottom of the layout were cut out and popped up too.

We're almost close to why I dislike bugs.  But let me just say those are glitter alphabets that I've been saving for years and I knew I had to save those letters so I had to be careful not to use them for another project.  Now I'll continue my bug story.  Do you see that cute little PTI star tag (Tiny Tags dies and stamp set) on the left?  I didn't want to stick that there.  It was mandated by the yucky bug that landed there.  It was a super small bug and I went to flick it off and it left a yucky mark on my layout!  Ugh!  Oh, this reminds me of another bug story.  My older son was about a year old or so and there was a tiny ant crawling on his bed.  So I told him to flick it off.  I must have said something like flick it, flick it.  Anyway, being that he was so young and probably didn't understand me, he thought I had said lick it, lick it.  So he did and that was the end of that ant.  Hahaha, that still cracks me up. 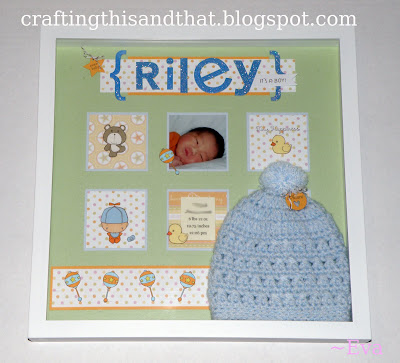 Here's the finished layout in the frame which I've had for years too just waiting for me to complete this project.  I'm happy that I've made one for each of the kids.  I hope my youngest likes his.  Oh, I also tied on a little PTI tag on the hat too.  I do plan on giving my kids their frames when they are older and have their own families and kids.  I think it'll be neat to look back at that.

Thanks for reading and have a great day!

Cheryl said…
Wow, sooo cute! What a nice keepsake for your kids! I'm amazed you even got around to it for your 3rd kid. Your hospital gave out cute hats! We got those generic pink and blue striped stretchy skull cap type hats. Ha ha! Love that eating the ant story!
April 13, 2011 at 4:37 AM

Lorraine said…
What a beautiful keepsake you created for your son, Eva. And I don't like bugs either, but more along the lines of BIG cockroach ones we have here, lol. Small tiny bugs I can deal with. But I wouldn't lick one, lol!
April 14, 2011 at 12:02 PM