By Cheryl April 12, 2011
I actually have another card!  I was debating about posting it, but I figure since I actually spent time making it, I might as well, otherwise who knows when I'll get a chance to make anything again.  Plus it took me so long to die cut the Hello Kitty.  So again, I found a sketch, this time at Card Positioning Systems #213. 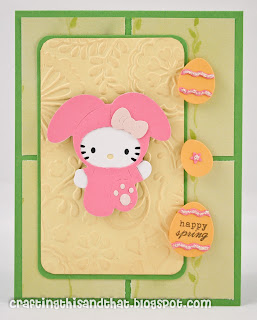 I wanted to use my Sizzlit Hello Kitty that Eva got me probably from a year or 2 ago, along with the Easter eggs.  I actually used this die cut last year, but my son used it for his own crafts, then before I knew it Easter had passed.

So I mainly got to work first on die cutting Hello Kitty and giving her a hot pink bunny suit. 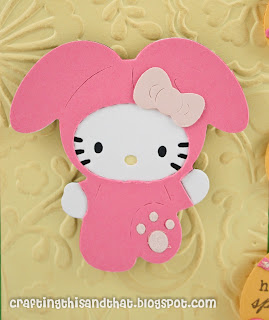 And then I pasted her suit on and realized I had forgotten to color her whiskers!  So I penned it in and it looked messy...so I had to cut everything again!  The second time I used a tip I read on someone's blog a while ago, and sorry, but I forgot who it was.  I think it was someone from Hawaii and I found it by googling something to the effect of "how to Sizzix Hello Kitty whiskers."  But essentially she recommended die cutting the face first in black, then layering a white face with the whiskers cut out over the black layer.  Although I guess since these whiskers are hiding under the bunny suit, I could have just taped a black piece behind the cut out whiskers.  Hello Kitty was also holding a cute basket full of flowers, but there didn't seem to be enough room on the card.  Plus those flowers were tiny, my stubby fingers and nails would have had problems trying to glue them down.

Anyhow, then I used PTI New Leaf cardstock for the base and some Spellbinders paper that I had bought from somewhere, possibly the Bazzill warehouse sale from years ago.  The main problem was deciding what kind of paper to use for the rounded rectangle.  Initially I considered a PTI bitty dot paper in light pink, but wanted something more contrasty, then ended up using the embossed lemon tart cardstock, which blends in with the green paper too much.  So I don't know, I should have looked up a color challenge somewhere to help me out with colors, or else I shouldn't have glued down the green paper so soon and picked a different pattern.  I inked the embossed parts with Antique Linen distress ink, but I guess it's not too obvious in the photo. 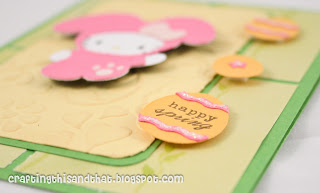 I used another PTI Tag-Its sentiment on the egg.  Then added some stickles to the wavy strips.  I am also going to add this to the Simon Says Stamp Challenge: Spring/Easter.

Lorraine A said…
Gorgeous card :-) the image is adorable and the colours and design are fab :-)