By Cheryl April 24, 2011
My son got quite excited when I told him about the Children's Challenge at Simon Says Stamp.  While I work on my cards, he often tries to make his own cards too using my scrap pieces of paper.  And then I get a little preoccupied keeping an eye on which supplies of mine is he using.  But below is usually what he does on his own time. 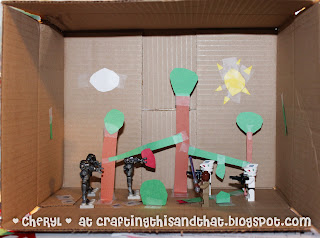 For some reason he wanted to make a diorama.  I think his teacher was talking about it at school recently.  So this is his jungle, with trees, vines, bushes, a hanging red fruit, one cloud and a sun, all taped down using his fancy desk tape dispenser from Costco. 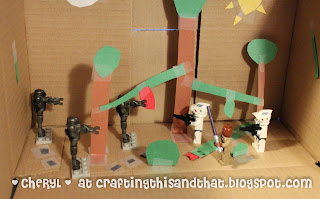 As you may have noticed, my son loves Legos and The Clone Wars.  He saw these videos on youtube where some people color their Lego clones, which he tried to copy with markers!  Except he used washable markers (whew!) and most of the ink ended up smearing off the plastic pieces.  But then he asked Dad to help him color it again with Sharpies!  So smart Dad says, hey, you should design your clone armor on paper first before you draw it for real on the Legos.  So they found a picture of the Lego Clone Trooper online and printed out multiple copies...and my son went to town with the Sharpies. 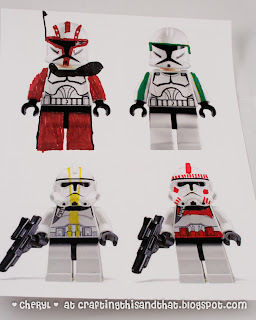 I had also found a picture of a different type of trooper too, I think that's a storm trooper on the bottom. 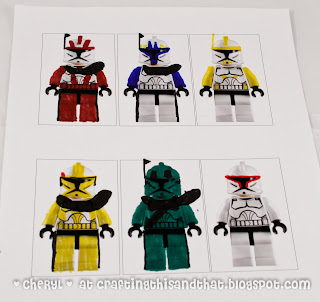 And more clones, with accessories. 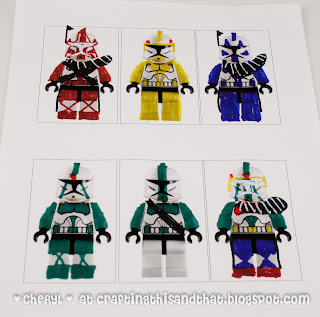 And even more clones...(and using my white Sharpie poster paint pen, ack!).  There were literally like 10 pages of these colored clones, some were getting wild, like zebra and tiger stripes even. 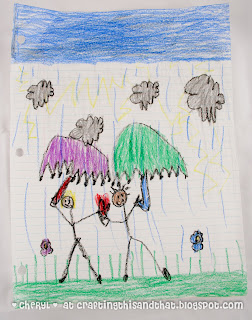 And lastly a crayon drawing.  It had rained really hard twice now over the last month or two.  Both times also happened to be on Saturdays when we had to spend all day outside.  And since it usually doesn't rain all that much around here, and we're usually not outside all day when it does rain, he thought it was so fun!  (Notice the stick people smiling in the freezing cold rain and 40 degree temperature! - they are even sharing a heart!)

Hope everyone had a nice Easter!

Heather said…
Gosh Ryan - you have been busy!! You've done a great job of colouring the clones with Mummy's sharpies.
I really like your card, your rain and rain clouds are fabulous and I like the stick people who are smiling and sharing a heart.

Lorraine A said…
oh wow !! I love the playset scene !! brilliant and the picture is fab too :-) It is so nice to see the people smiling even though its raining :-)

Mandy said…
Oh wow this is fabulous Ryan, beautiful colouring and a fabby scene.
Thanks for joining us at Simon Says Stamp for our childrens challenge
hugs Mandy xx
April 30, 2011 at 12:37 PM