By eva April 21, 2011
Hi!  I'm continuing to post my kids' creations this week.  So next up is my youngest.  He has just discovered that scissors can cut really well and likes to cut up any stray pieces of paper.  Before that he used these plastic scissors that would just basically rip the paper instead of cutting it.  So now that he is using real kid-safe scissors, he is super happy to just sit and cut.  He has his own "cutting box" that he cuts his paper into so clean up is easy too.  My older 2 also went through this phase and loved cutting in preschool.

I've also recently organized my crafting table and actually stole my kids' bookshelf to store more of my crafting supplies so there is more space to work on my table.  My youngest now can craft next to me during the day and it gives me a little bit more time to craft in between the requests that he makes to stamp an image here or there on his own paper.  He'll color and cut them out and glue them too. 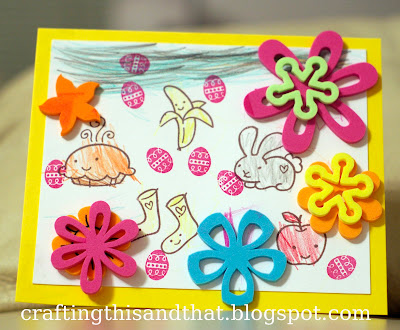 So this is my youngest one's creation.  He loves the images from Lawn Fawn's My Silly Valentine.  He calls the socks, boots.  I stamped the images where he wanted them and he then colored them in with pencils.  He stamped the egg image which is from PTI's Tag-its series all over the card.  He tried coloring the background like how his big sister did on all her labels but kind of gave up.  I think he colors pretty nicely for a 2 year old.  Maybe even better than his big brother who still rushes through his coloring.  We have lots of foam stickers so he added some flowers as well.  Love his layered flower look.

I asked who he wanted to give this card to and he said to our cousin who he loves to play with.  I know he will love seeing his card on the computer, and he'll be entering this in Simon Says Stamp Special Children's Challenge.

Lorraine A said…
What a beautiful card :-) I am loving Lawn Fawn stamps too and the ones he chose to use are gorgeous :-) His colouring is lovely and the embellies are perfect :-) I am sure his cousin will love this card :-)

Cheryl said…
So cute! You have a mini-Eva! He colors super nice! I can't believe he can already stay in the lines! Love the easter eggs and flowers!
April 22, 2011 at 4:19 AM

Lorraine said…
Aw, this is so cute! He colors awesomely for a preschooler! Love the stamps, little eggs throughout, and the layered flowers. And ahem, yes, he must've been observing his mama's crafting style - his card is very balanced - and he's got his mama's skills.
April 22, 2011 at 3:23 PM

Heather said…
A fabulous card Riley, your images are fabulous and you've stamped that egg so well!! I love the addition of all the foam flowers.