Getting Ready for Mother's Day

By Cheryl April 25, 2011
I actually felt a little bah, humbug, this Easter.  And for the first time (since having kids) we didn't really do anything.  We usually color Easter eggs, but last year we found out my daughter had an egg allergy.  At that time, she was still young enough to not know what was going on and let her brother color his eggs in peace.  This year, probably not so much.  Plus she also can't eat chocolate so we didn't really make a big deal about easter candy either.  But I felt I got a lot of house chores done!

And since I had time, I thought I'd better get started on some Mother's Day cards and be a little prepared this year since I didn't make anything last year.  And if I make 1 card, I would have to make 3 (one for my mom, my mother-in-law, and grandma).  I used the sketch idea from Clean & Simple stamping 137. 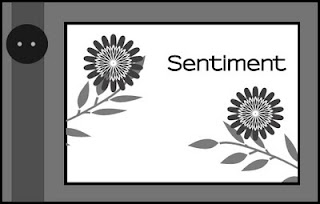 And essentially just made 3 versions of the same card, although I rearranged the sketch and put my bow on the bottom. 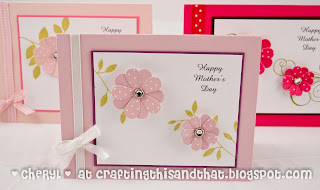 This one used Papertrey ink Lavendar Moon and Plum Pudding cardstock.  I used the Beautiful Blooms die to cut a plain cardstock flower and a bitty dot flower, layered them, then stuck a brad through.  The leaves were from Turning a New Leaf in Spring Moss.  The sentiment was typed out on my computer into a text box in Word, then printed out. 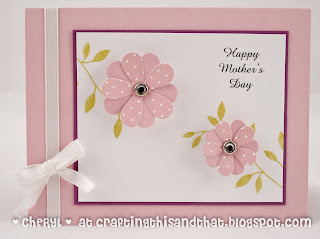 This is the Raspberry Fizz version with a Dark Chocolate mat.  I don't know why I always have a hard time photographing the true color of Raspberry Fizz.  Same idea with the flowers, but used Fancy Flourishes in Ripe Avocado for the background instead. 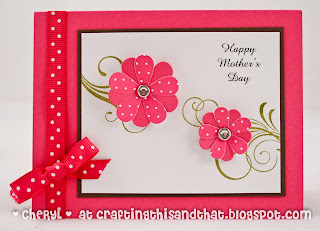 And this is the Sweet Blush version, matted on Hibiscus Burst.  Again, using a different leaf from Turning a New Leaf.  All the bows were made with the Bow-Easy.  I'm going to have to research how people keep their knots tight.  And thanks, Eva, for the double stick tape, it works great on ribbon! 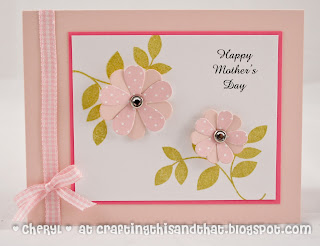 I tried to bend the brad and flower petals up to give it some dimension.  They were stuck on with a zot dot, hopefully it will hold.

I will also enter this in the Claudia and Company challenge #80, Clean and Simple.

eva said…
wow! you were very productive! these are so pretty! i love all the different color combos. these would make a nice set of gift cards. hmmm, i may have to make something similar with different sentiments.
April 25, 2011 at 9:40 PM